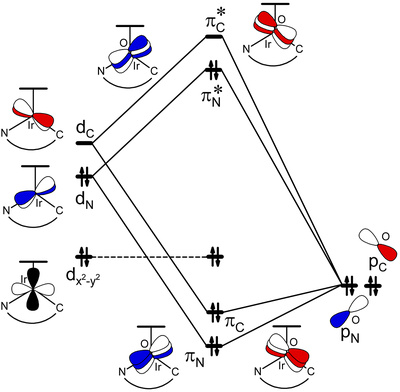 Cp*Ir complexes stabilized by chelating C,N and N,N ligands are amongst  the most active catalysts for water oxidation reported to date. These systems were studied by means of DFT calculations in collaboration with the experimental group of Crabtree, which originally developed them.

The initial exploration of the catalyst bearing the ortho-C6H4-C5NH4 chelate revealed an unusual feature in the electronic structure of this species. In the postulated Ir(V)-oxo active species, one of the two pi*(Ir=O) orbitals, the one syn to N (Figure), is doubly occupied. This orbital is an out-of-phase combination of a metal d lone-pair with an oxygen p lone-pair and stands at the HOMO level. The other possible lone-pair combination yields the orthogonal pi*(Ir=O), which remains empty at the LUMO level. This electronic configuration directs the reactivity of the system towards the Ir=O moiety, which is activated for undergoing the nucleophilic attack of water.

In a follow-up study, we explored the reactivity of this Ir(V)-oxo species in the singlet state. We found that this complex undergoes the addition of a water molecule to form an O-O bond, which is believed to be the crucial chemical event in catalytic water oxidation. In this reaction, the Ir(V)-oxo and water act as electrophile and nucleophile, respectively. The nature of the proton acceptor (PA) has a critical influence on the energy barrier of this reaction, being 36.1 kcal/mol when the PA is the Ir-bound N and 32.2 kcal/mol when the PA is the Ir(V)-oxo moiety. In the latter case, the barrier is reduced dramatically to 24.0 kcal/mol, if one additional molecule of water assists the reaction by acting as a proton shuttle. The role of proton transfer in this reaction was further explored in a study focused on the reactivity of the protonation states of the complex [Ir(O)(X)(phpy)2]n (phpy = C6H4-C5NH4; X = OH2 (n = +1), OH- (n = 0), O2- (n = -1)). Contrary to the expected trend, DFT calculations showed that the lowest energy barrier is not given by the most electrophilic Ir(V)-oxo, [Ir(O)(OH2)(phpy)2]+, but with the most nucleophilic one, [Ir(O)2(phpy)2]-, due to the highest basicity of the X ligand, O2-, which accepts the proton released by water upon O-O bond formation.

Recent experimental studies on these Cp*Ir catalysts have shown that, depending on the nature of the chelate, the Cp* may fall off from the first coordination sphere of the metal, yielding dinuclear species or nanoparticles.