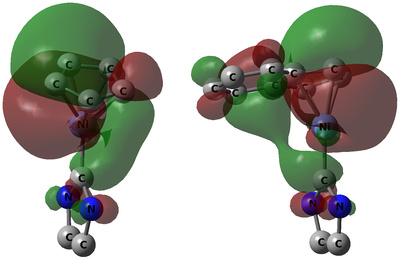 Metal-catalyzed cross-coupling reactions are amongst the most powerful chemical transformations in the synthetic chemistry toolbox. The work in this field by Heck, Negishi and Suzuki was indeed awarded with the Chemistry Nobel Prize in 2010. Cross-coupling reactions have opened new routes in the synthesis of natural products with biological and pharmacological activity.

My first work in this field was published in 2004. It focused on the selectivity of intramolecular Heck reactions growing polycyclic systems and it originated from a short PhD exchange in the University of Calgary (Canada), where I started a collaboration between the theoretical and experimental groups of Profs. Tom Ziegler and Brian Keay. In this work, we showed that the ring strain that builds up in the polycyclic structures determines both the thermodynamic and kinetic parameters controlling the selectivity of the reaction.

More recently, together with Prof. Mats Tilset and postdoc Ainara Nova (CTCC @ UiO), I initiated a collaboration with the experimental group of Prof. Nilay Hazari at Yale University (US). This work is on the activation of the precatalysts used in cross-coupling reactions, including the Suzuki-Miyaura, and focuses on Ni(0) and Pd(0) complexes stabilized with N-heterocyclic carbenes (NHCs). DFT calculations and NBO analysis are being used to explore and understand the reaction pathways by which these species are either activated by oxidation, or deactivated by comproportionation. Cp/In-Ni(I) monomers and allyl-bridged Pd(I) dimers have been already characterized following a synergic theoretical/experimental approach.