Can we fuel the planet with sunlight and water? 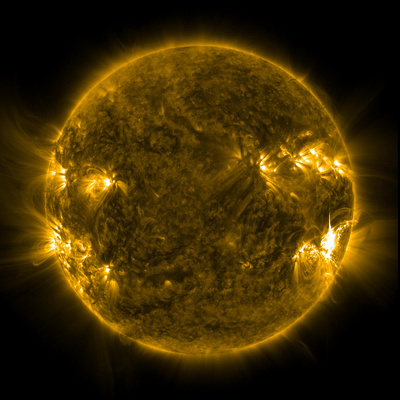 The Sun: A megagigantic nuclear reactor undergoing explosions and delivering massive amounts of energy, which, down here on Earth, are largely missused by us. Plants do actually use this energy for a good reason: Generating the fuel on which they live. Sunlight is used in photosynthesis as the source of energy required to transform carbon dioxide and water into sugars and other key biomolecules. This is a clean process running under mild conditions, in which a greenhouse gas is consumed to generate oxygen as the only by-product. So, can we mimick plants and fuel our planet with sunlight? Yes, in principle. And it would be indeed very convenient, because the only thing that can happen with poluting oil in the next few decades is this being more expensive and less safe.

Catalytic water oxidation is the key reaction embedded within the photosynthesis process. In this simple, yet challenging reaction, two molecules of water are combined to produce one molecule of oxygen, four protons and four electrons, which can be used to generate either electricity or hydrogen. The main difficulties in making this reaction profitable on a large-scale are two: 1) It should be feeded with energy (this is an endoergic reaction) and 2) it is too slow (this is a high-energy barrier reaction too). The first problem would be solved if sunlight could be efficiently used as the source of energy, which is clean and renewable but difficult to capture and transform. The solution of the second problem requires a good catalyst. This should be highly active, robust and cheap. My theoretical studies on iridium-catalyzed water oxidation focus on the development of this catalytic technology. If the scientific community manages to solve these two challenges, we should then be able to generate hydrogen easily from just water and sunlight. And this may completely change the way in which we use energy; i.e. locally-produced hydrogen can be used on fuel cells (another thechnological challenge, already quite advanced) to generate the power needed to illuminate the streets, heating homes, run the cars... This new energy scheme, based on the chemistry sunlight + water < > oxygen + hydrogen, is fully renewable and free of carbon dioxide emissions. A strongly motivating dream, still!